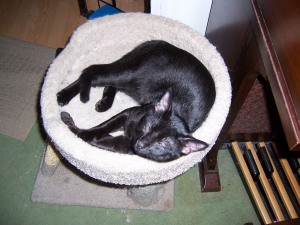 About two years ago we had a new addition to our family.   It wasn’t really a well thought out thing, it just happened.  You see, I have an enormous weakness for black cats.  I just love them.  I have had many of them through out my life and they are different than most cats.  Black cats have a very different attitude, a very different look and well, they are good luck if you own one.  Oh, I know all about the superstitions associated with them, perhaps that’s why I have such a heart for them.
This is Batman.  At the last apartment complex we lived at a group of kids had found him and were carrying him around and basically were loving him to death.  The kids had good intentions, but they were little kids and Batman was just a little bitty, scrawny kitten, and they were handling him way too much.  My daughter, Lindsey had broken her leg while climbing in a tree.  She had rescued the kitten from the other kids and was holding him in her lap, looking up at me with those big grey eyes.
“NO!!  Absolutely not!” I said firmly.  “I’m NOT getting another cat!”
“Mom, Please!”  Lindsey repeated over and over.  I wasn’t going to budge, I was determined not to add another pet to our house.  I handed the kitten back to the kids who ran off to see if they could have him, then helped Lindsey get back into the apartment and settled on the couch.  I then left the apartment, walked over to where the kids were gathered still petting and passing the poor little thing back and forth.  I reached in the middle of them and took him, held him to my chest and turned to walk away.
“HEY!” they yelled, “what are you going to do?”
“I’m taking my black cat home,” I replied, and left them standing with their mouths hanging open.

The little black ball of fur curled up against me began to purr weakly.  I took him in the house, fixed him some warm milk and gave him a box with a warm towel.  I told Lindsey and Casey they were not to pick him up or touch him much for the next few days because he’d been handled way too much.  Lindsey wanted the box next to her so she could watch over him.  By the next night the kitten was sitting up and looking at her curiously.  Pretty soon they were sleeping together and this tiny kitten, first curled up on her pillow, then worked his way over to nuzzle in her hair and find her ear.  The strangest thing ever was when he started sucking her earlobe.  It was too funny to dismiss.  The kitten was named Batman because when we found him he was so scrawny and had such big ears he looked like a black bat.
He is a part of our family this black cat, what a stroke of good luck for all of us.
Cherry Coley (c)